Full Name
Debbie Mesloh
Job Title
Principal
Company
Mesloh Strategies
Speaker Bio
Debbie Mesloh has worked at the highest levels of both the public and private sectors.
Debbie currently serves as a communications consultant, assisting clients with communications strategy, crisis communications and political strategy. Her clients include a variety of leading nonprofits focused on criminal justice reform and advancing women's issues as well as political clients in California and multinational corporations. The majority of her clients are organizations run by women.
Debbie has long served as one of Kamala Harris’ senior advisors. She served on Harris’ first successful race for SF District Attorney in 2003, and has been a part of every one of Harris’ campaigns since. In addition, she served as communications director at the SF DA’s office and California Attorney General’s office. Debbie also co-led Senator Harris’ transition to the United States Senate. In the intervening years, she served as a member of her kitchen cabinet and as a key part of her external team, with a specific focus on strategic communications, rapid response and stakeholder outreach. These roles gave her the invaluable opportunity to help shape the public narrative of her extraordinary life, career and accomplishments.
Debbie served as a spokesperson in the 2008 Obama for President and 2012 Obama for re-election campaigns. She was appointed by President Obama as a White House Political Appointee to the Public Affairs Office of the United States Trade Representative, where she had a focus on China and cybersecurity.
Debbie was recruited to the private sector in 2011, where she served as Vice President of Global Government and Public Affairs for Gap Inc. At Gap, she led communications for the company’s corporate social responsibility work as well as the strategy for the company’s international, national, state and local government affairs.
Debbie’s career has included opportunities to work as a communications director for the Atlanta City Council and as the first press secretary for the mayor of Wichita, Kansas.
Her volunteer work focuses on elevating women. She is the immediate past president of the San Francisco Commission on the Status of Women, a mayoral-appointed position. She is a founding member of the Emerge America program, which seeks to recruit and train qualified women to run for office and is former President of the San Francisco Women’s Political Committee. Debbie served as women’s policy lead for the transition of San Francisco Mayor London Breed, as well as an advisor during the mayoral campaign.
Debbie grew up on Air Force Bases throughout the country and graduated from University of Kansas.
Speaking At
Luncheon Keynote - Communicating in a Polarized World
Women in Communication 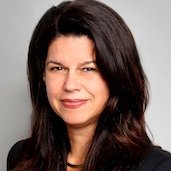